Conference registration will open on February 13, 2023 after accepted presenters are notified.

SCRE 27 is being organized by an international cross-section of leaders in the field of CRE from industry and academia, and will feature more than 200 oral and poster presentations highlighting key advances and opportunities in CRE. More information on invited lecturers and key technical themes of the conference are available on the Conference Details page.

Chemical Reaction Engineering (CRE) is the discipline that quantifies the interactions of transport phenomena and kinetics in relating reactor performance to operating conditions and feed variables. This quantification requires a thorough understanding of the nanoscale (molecular level of scrutiny), micro- to mesoscale (transport and kinetic events at a particle level), and macroscale (reactor design in the context of process and plant design). CRE develops general principles useful in approaching a variety of systems (chemical, biochemical, biological, materials, environmental, electrochemical, etc.) where engineering of reactions is needed.

BlackCycle consortium with CERTH propose an abstract at ISCRE27 on June 11-14th, 2023

End-of-life tires (ELTs) represent a large, untapped source of raw materials. In this work, the conversion of ELTs to highly aromatic oils via ex-situ catalytic pyrolysis was investigated in a pilot-scale unit. The pyrolysis of ELTs was carried out in a bubbling bed reactor for the production of pyrolysis vapors, which were catalytically upgraded in a circulating fluidized bed catalytic reactor using USY- and ZSM-5-based catalysts. The produced oils were extensively characterized to investigate the effect of the catalyst and experimental conditions on their composition. Pyrolysis oils with up to ~82 wt.% aromatics were obtained, with yields ranging from 32-38 wt.% on dry feed.

Introduction
Over 1 billion new tires are sold globally every year. As a result, a roughly equal number of tires enter the pool of end-of-life tires (ELTs) annually. Current tire recycling technologies are not circular and do not result in the production of materials that can be reused by the tire industry. Moreover, due to the limited demand for tire recycling products, ~50% of EU’s ELTs are not recycled and are instead exported to other countries (Word Business Council for Sustainable Development, 2008 and Costa et al., 2022).
The aim of this study, which is part of the EU project BlackCycle, was to develop a catalytic pyrolysis technology for the recycling of ELTs into raw materials that can be used for the production of new tires. Via pyrolysis, ELTs can be converted into pyrolysis oil, solid and gas products. The solid pyrolysis product can be used as a substitute for the carbon black that is used as filler in the manufacturing of tires. Moreover, aromatic compounds in the pyrolysis oil can be used as feedstock in a furnace process for the production of virgin carbon black, which can also be used for the production of new tyres. Lastly, the gas pyrolysis product can be burned to produce electricity or to provide heat for the pyrolysis process.
In this work, ELTs were pyrolysed in a pilot-scale bubbling bed reactor for the production of pyrolysis vapors, which were catalytically upgraded in a circulating fluidized bed (CFB) reactor with USY- and ZSM-5-based catalysts, in order to maximize the content of aromatic compounds in the resulting pyrolysis oils. The pyrolysis oils were thoroughly characterized and the effect of the catalysts and process conditions on their composition was investigated.

Experimental
The ELT feedstock was provided by Aliapur S.A., and was described as “granules of multi-brand truck tyres”. The particle size of the feedstock was 1-3 mm, and it was composed of 80.7 wt% C, 7.6 wt% H, 1.1-3.6 wt% S, 0.1-2.6 wt% O and 8.0 wt% ash. The catalysts used were an e-cat FCC catalyst (USY) and a steamed (788°C/20 h/100%steam) ZSM-5-based catalyst. The textural and acidic properties of the catalysts are presented in Table 1.
The pyrolysis of the ELT feedstock was carried out at 500 °C in a bubbling bed reactor loaded with an inert heat carrier (silica sand). The pyrolysis vapors were transferred to a CFB reactor for catalytic upgrading at temperatures 500-600 °C and at catalyst-to-feed (C/F) ratios 5-25. The CFB reactor circulated the catalyst between a regeneration and a reaction vessel, ensuring the continuous supply of active catalyst for the upgrading of the ELT pyrolysis vapors. Base-case non-catalytic runs at 500 °C were carried out in the pyrolysis reactor alone, bypassing the CFB. The pyrolysis oils were analyzed by elemental analysis, simulated distillation, GC-MS and HPLC to determine their composition and their content in aromatics.

Table 1. Textural and acidic properties of the catalysts used in this work

Results
Non-catalytic pyrolysis of the ELT feedstock yielded ~50 wt% dry pyrolysis oil, 8 wt% gases and 34 wt% solid product. Catalytic upgrading of the pyrolysis vapors in the CFB resulted in a drastic decrease of the pyrolysis oil yield to 32-38 wt%, in favor of the gas products, composed mostly of C3-C4 hydrocarbons, which increased to 15-21 wt%. However, the decrease in the pyrolysis oil yield was accompanied by a significant increase in the aromatics content and molar C/H ratio (an indicator of aromaticity), as shown in Figure 1. Increasing the C/F ratio and/or the catalytic upgrading temperature resulted in a further increase of the aromaticity with minimal loss of pyrolysis oil yield. The increased aromaticity was also confirmed by quantitative HPLC analysis. Simulated distillation analysis indicated that the ELT pyrolysis vapors were composed of ~25 wt% heavy compounds, which were catalytically cracked in the CFB towards gasoline- and diesel-range compounds. 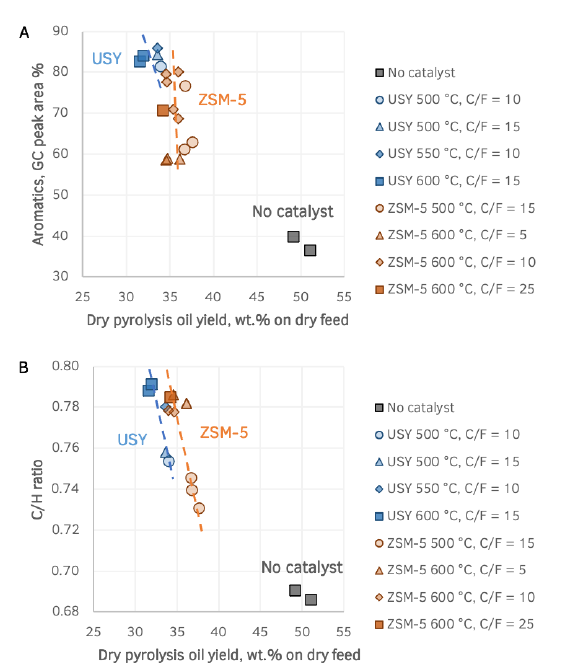